Researchers have Exposed over 200 Disinfection By-products

The new technology is called membrane introduction mass spectroscopy and it's used to detect volatile molecules in water. Scientists can now identify and evaluate chemicals formed during reactions between chlorine and many types of organic matter present in every pool. Because swimming pool water is re-circulated over and over again, contaminants may build up in the water over a period of time. Organic matter such as leaves, debris, sweat, urine and even fecal matter is almost always present. When pool chlorine reacts with organic matter, a number of complex chemical reactions take place. The result is the creation of disinfection byproducts (DBPs). Chloramines, and specifically, Trichloramines have proven one of the most dangerous.
Disinfection by-products include:

The Dangers of Pool Disinfection By-products

Disinfection by-products can cause a number of health issues and diseases as documented by three credible studies on pool chemicals. When you add a certain chemical to a pool, it’s common for it to quickly change forms by combining with another chemical. Sometimes a completely new chemical is formed, one that acts much different than it’s precursors.

Studies have linked chlorine by-products to asthma, allergies, bladder cancer and other diseases. You may find more information, including peer reviewed scientific studies, at our page on pool chemical studies.

The Danger Zone Just Above Your Pool Water

The twelve inches of air just above a chemically disinfected pool or spa can be a real danger zone. This layer of unsafe air can be laced with trichloramines. This problem equally affects pool with regular chlorine and chlorine generated in salt water pools. Unfortunately, children are most affected because they generally breathe air closer to the water surface amd their lungs are still developing. Since chloramines are heavier than air, they will hover just over the pool water. Even a moderate concentration of trichloramine may cause eye and upper respiratory irritation. Trichloramines is a strong irritant to the lungs and mucous membranes. Symptoms of exposure may include excessive eye tearing, dry cough and irritation of the eyes, nose and throat. Chloramines may be detected as “chlorine oder”. However, the common smell is not chlorine but is the chloramines, a by-product of chemical sanitation.

Ultraviolet disinfection is being called the biggest breakthrough in the pool industry in over 30 years. Worldwide, the commercial pool industry is moving to ultraviolet. As a champion of best practices in pool sanitation, the World Health Organization has publicly stated that "Lower free chlorine conentrations may be health protective when UV is used". Now SpectraLight has made ultraviolet affordable for every pool owner. Learn more about ultraviolet pool disinfection and how to protect what's important.

“the impact of pool chemicals to our children is five times greater than second hand smoke”. 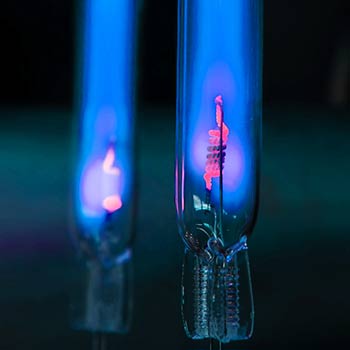